Warrior Fieldhouse is the home to the Volleyball, Basketball, and Physical Education programs of Covenant. The 850-seat venue was built in 1997 with the original construction of the school. 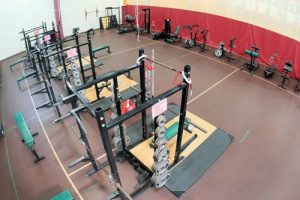 In 2006, the auxiliary gym was converted to contain a 3500 square feet weight room. It includes a plethora of free weights and machines as well as space for speed and agility training, and a drop-down batting cage for baseball and softball. The former weight room was then converted to a cardio room with treadmills, stationary bikes, elliptical machines and space for aerobics and yoga. Future building expansions call for adding more locker rooms and team space.

In January, 2016, Covenant Alumnus Andrew Smith (Class of 2009) passed away after a two-year battle with cancer. Andrew was a 4-year varsity basketball player, who was the 2009 City Player of the Year, and at the time of his graduation held seventeen program records including most career points, rebounds, and blocks, and helped lead the Warriors to the program’s first Sectional title. Andrew also went on to attend and play four years at Butler University. He was a part of back-to-back teams that were national runners-up in the NCAA Tournament. He is one of three players in Butler history to score 1000+ points and have 100+ wins. He and wife Samantha (Covenant

Class of 2010) were great examples of faith throughout their battle with cancer and the promotion of the bone marrow donor registry, Be the Match. On December 3, 2016, the playing floor in the gym was rededicated as Andrew Smith Court at Warrior Fieldhouse. An anonymous donor provided for the wood floor to be completely redesigned and refinished, bearing Andrew’s name and signature to honor his faith and legacy to future Covenant students. As part of the floor refinish project, the Warrior Athletic Booster Club provided new American and Indiana state flags as well as banners to commemorate the retirement of Andrew’s #33 and the State Champion and Runners-up teams.