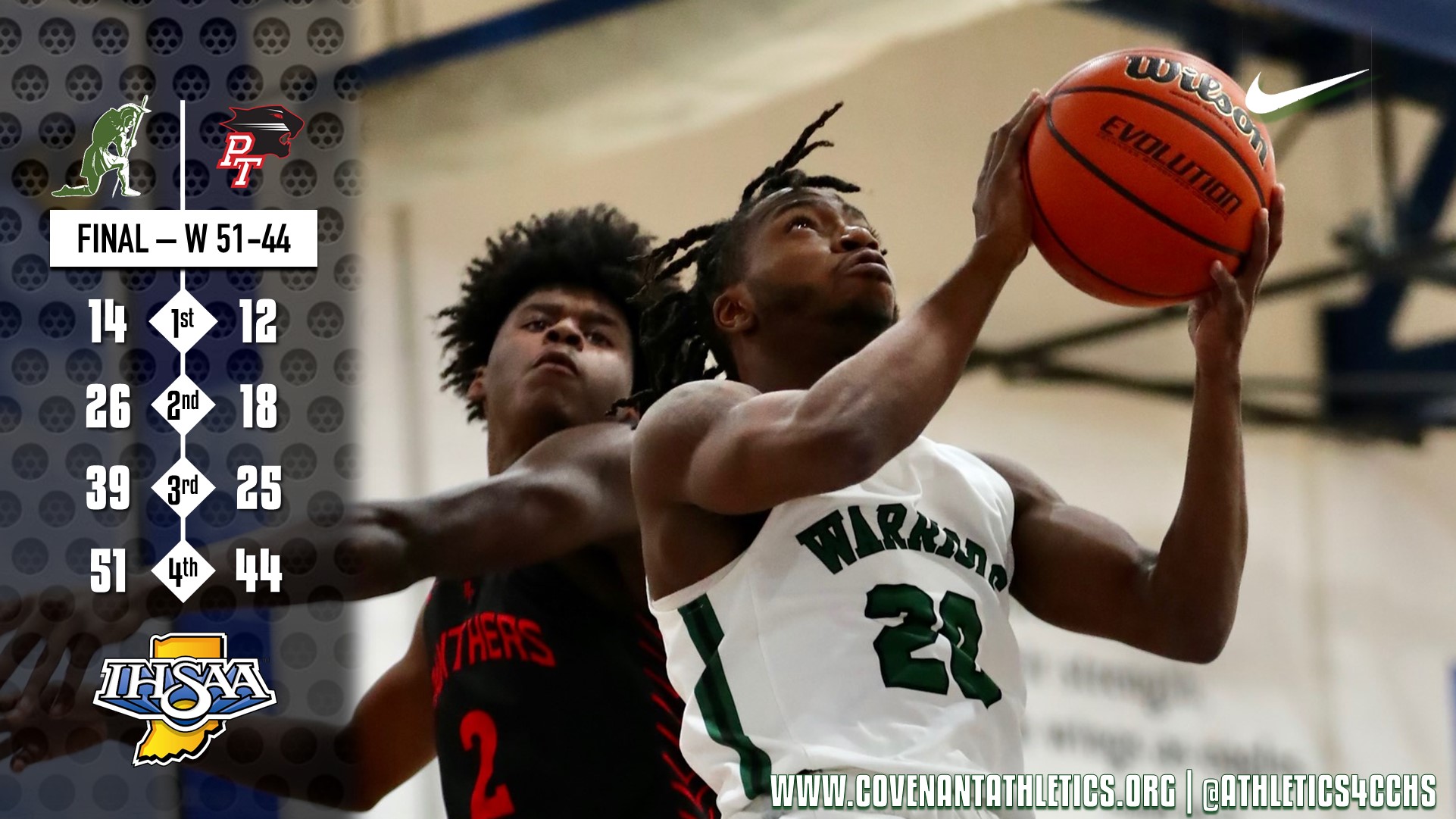 Covenant took on Park Tudor last evening in a Sectional 42 rematch from last year’s championship game. The Warriors beat the Panthers 51-44, but it was a hard fought battle as they now set off to face Heritage Christian this evening.

CCHS got off to another slow start like their game on Tuesday. Park Tudor took a 0-4 lead until Brock Buckley scored his first of 15 points to put the Warriors on the board. The Warriors then scored in spurts of threes as BJ scored an and-one to take lead, followed by Buckley scoring the next nine for the Warriors. Covenant ended the quarter with a 2-point advantage, 14-12.

The Warriors were active on both the offensive and defensive boards. They struck first in the second quarter with a 3-pointer from Graham Shelton after Tony Flatt secured an offensive rebound. Covenant was able to limit Park Tudor’s scoring to 6 in the quarter.
Trey Flatt picked up 5 points in the quarter after scoring off an offensive rebound from Micah Wilson and then knocked down a 3-pointer to extend the lead to 8 with 3-minutes left in the half. Graham Shelton tallied 5 points as well while Buckley added 2 as the Warriors finished the half with an 8 point lead, 26-18.

The third quarter belonged to the Warriors as Buckley started the half off with a bucket after securing his own rebound. BJ Lomax scored the next two baskets as Covenant started on 6-0 run to start the half. Micah Wilson also got in on the scoring action with a drive to the basket, which was then followed by another Graham Shelton three after Covenant secured yet another offensive rebound. Trey Flatt also scored, but the Panthers were able to score a last second layup to end the quarter. Warriors led 39-25.

The fourth quarter saw a strong comeback effort from Park Tudor as they opened up the quarter with a 8-0 run. Covenant was able to end the run with a free-throw off a technical foul, but PT scored a 3 to draw within 4. They had all of the momentum until Trey Flatt responded with strong drive to the basket to score Covenant’s first field goal in the quarter. Covenant then applied pressure and forced a steal that Lomax scored on. The Warriors were able to burn some clock as they maintained possession, which eventually led to another Lomax layup. PT wasn’t finished, though, as they responded with a 3-pointer with less than 2 to go. It eventually came down to free-throws for Covenant as they knocked down 5 for 6 to finish the quarter and the game, winning 51-44.

The Warriors were led in scoring by Buckley with 15, Trey Flatt with 12 and BJ Lomax with 11. Covenant will now return to Heritage to face the host for the third time this season. The Warriors defeated the Eagles at HCS in regular season play, 67-63. They played again in the City Tournament as Covenant beat them 82-46. Heritage defeated University in the first round, 62-45, and advanced to the finals after Irvington forfeited their game. Tip-off will be at 7:30pm with coverage provided by IndianaSRN ($10).