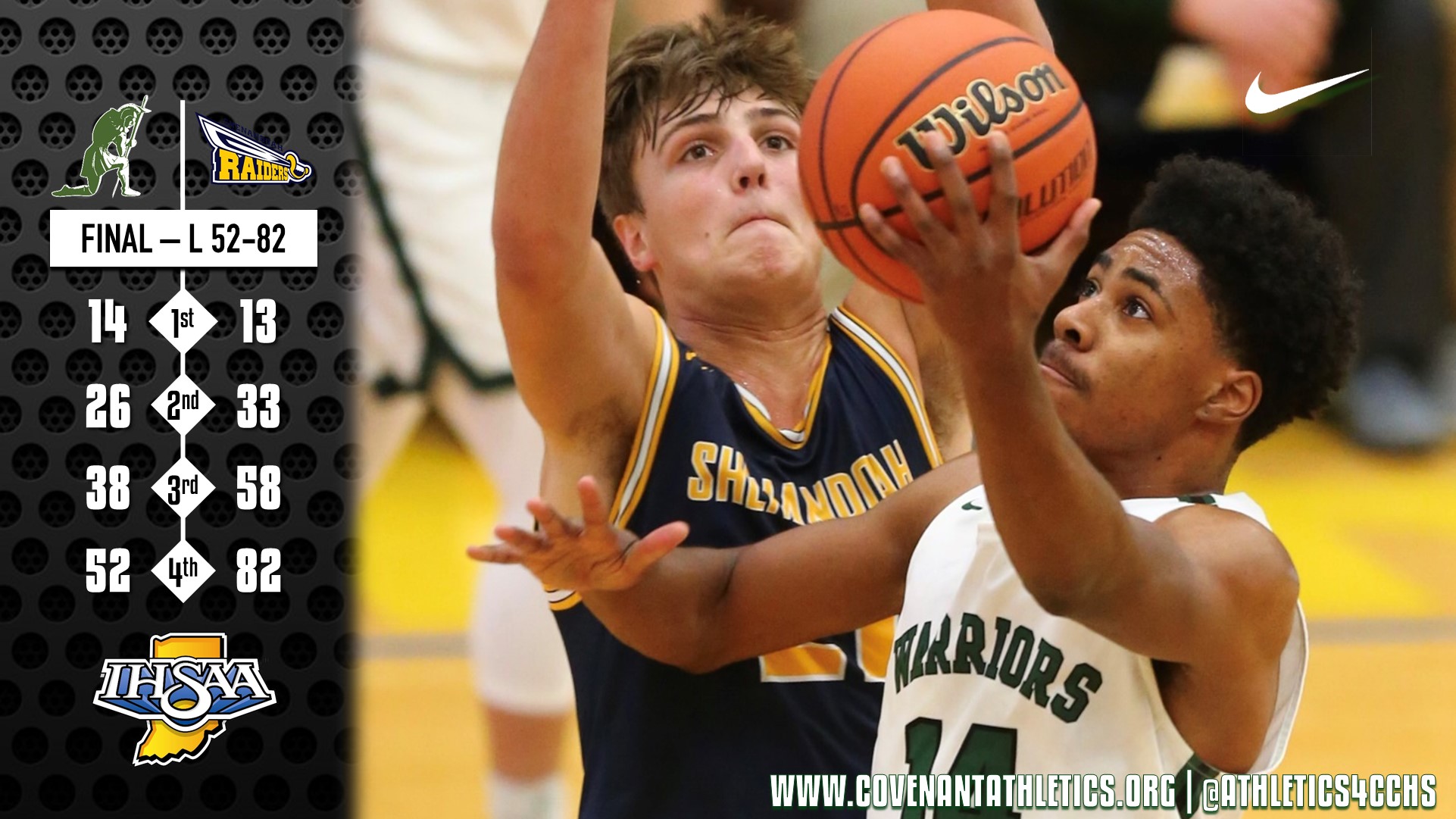 Covenant Christian lost in the first round of Regional #11 play vs. the #2 ranked Shenandoah Raiders this afternoon. Both teams had won their Sectionals last year, but the 7th ranked Warriors sought to claim their first Regional title in program history today.

It was a tightly contested first quarter with Micah Wilson starting the teams off in scoring with a pull-up jumper at the free-throw line. A majority of Covenant’s shots came from beyond the arc as Graham Shelton knocked down two 3s as well as Bryan Lomax and Trey Flatt. The Warriors were tough in the post defensively forcing a couple jump balls, but Shenandoah kept things close as CCHS led 14-13 at the quarter.

The second quarter belonged to the Raiders. They took and maintained the lead after Doah’s Andrew Bennett knocked down a deep 3. The game was close for the first few minutes, but Shenandoah went on a 10-0 run before Trey Flatt was able to score in the paint. Lomax was also able to draw a foul inside the arc to knock down some free-throws while Graham Shelton hit his third 3 in the afternoon. The Warriors cut the lead to 7, 26-33, at the half.

Covenant started with the ball and cut the lead to 5 with 2 free-throws from Lomax. Lomax ended up on the free throw line five times in the game, finishing 8 of 9. 4 points was the closest the Warriors could get to the Raiders the remainder of the game, though, as offensive rebounds and sharp shooting from Shenandoah got the best of them. The Raiders went on two 7-0 runs in the quarter, and eventually extended the lead to 20 after scoring a 3 at the end of the quarter, 38-58. Lomax scored 10 of the Warriors 12 in the quarter.

Covenant wasn’t ready to give up just yet as G. Shelton knocked down another 3 to open the quarter. He finished the afternoon with four 3s and 14 total points. The Warriors couldn’t generate enough offense, though, only putting up 14 points to Shenandoah’s 24 in the quarter. At the end of the game, Shenandoah won 82- 52.

The Warriors finished their season with a record of 22-5, claiming the most wins in program history. They broke several other individual and team records throughout the season and also won the Morristown Tournament and the school’s first Circle City Conference Championship. The Warriors will graduate 8 seniors: Jaden Ashley, Caleb Crane, Trey Flatt, Bryan Lomax, Graham Shelton, Luke Shelton, Micah Wilson, and DaVon Woods. They also graduate 2 senior managers, Jackson Brough and Amelia Lampen.