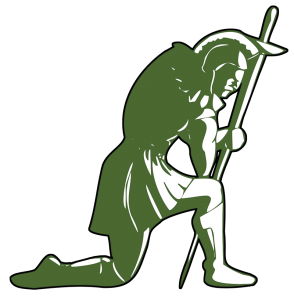 The Kneeling Warrior is the official logo of Covenant Athletics. Tony and Sandy Johnson were one of the founding families of Covenant. Their sons Andrew (‘01) and Michael (‘03) both graduated from Covenant. Michael returned in 2007 as an Assistant Warrior Soccer Coach and eventually became Head Coach, taking the team to a State title game as well as winning multiple City, Sectional and Regional Championships. His final season with the Warriors was in 2016. The Johnson family clearly values The Warrior and what it represents.

Sandy describes the origin of The Kneeling Warrior:
“As I was a professional artist and mom at the time the school was started, I wanted to see if I could come up with a warrior. The boys had all of the superhero comics for me to look through for a tough guy. The Kneeling Warrior idea came from one of those characters. We placed the sword in his hand and dressed him accordingly. I had done some folder art with the armor of God, so I was on a roll. The Kneeling Warrior showed that the best fight was on our knees. The Kneeling Warrior made the cut and has happily been used since.”

The Kneeling Warrior is not just a logo. It is a symbol to our opponents and a reminder to our athletes that no matter how many wins we achieve through the struggle of competition, humility is to be at the heart of each one. Have we perfected that? No, but there are opportunities with every competition that allow our athletes to grow – even in the midst of heartbreaking loss. Winning is important, but it is secondary to the Godly principles that the program is striving to instill into the student athlete.

The official logo of the Covenant Athletic department is branded, but can be used in a couple of different options.  The logo can be used in both maroon and dark green.  It is often also used with a 4-color shield behind the logo, a connection to the school’s official logo. 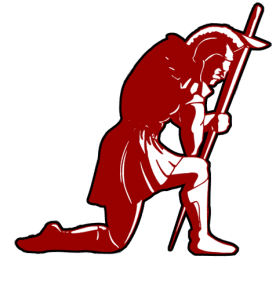 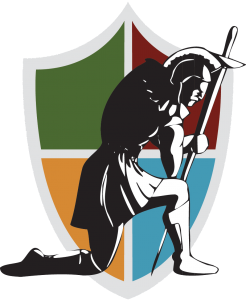 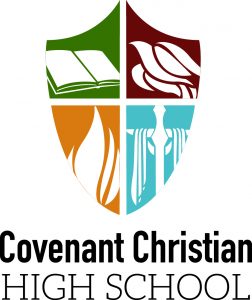