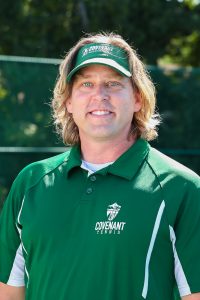 Coach Bird is entering his third season in his second stint as the head coach of the Boys Tennis team. Covenant’s teacher of calculus and physics coached the first boys team in 2000.  He then coached the first girls team in the Spring of 2001 when the #2 singles player went undefeated in the regular season.  He continued coaching for several seasons, but took a break with the birth of his 7th child and served in an assistant coaching role.  Several of his daughters have participated in the girls tennis program. Now Sean is off the sidelines and back on the court instructing and encouraging an exciting group of young men.  Bird is also the head coach for the Lady Warriors Tennis program.

Coach Bird’s wife, Monica, serves as the assistant coach for both the Boys and Girls Tennis programs at Covenant.  Monica played for Brownsburg and Milligan College.  Monica’s main focus will be on mentoring newer players.  She also is a nurse at Hendricks Regional Hospital.