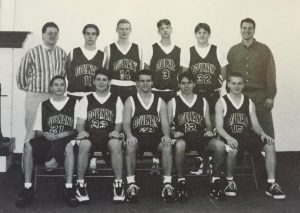 As with many new beginnings, the Athletic Department experienced growing pains in its formative years. The Athletic Department at Covenant began in the winter of 1995 with the start of the first basketball team. Since that time, Covenant programs have grown to 18 varsity sports and one club sport (non-IHSAA sanctioned sports).

Covenant officially became a member of the Indiana High School Athletic Association (IHSAA) in 1999. After the mandatory 3-year waiting period, the Warrior Athletics teams became state tournament-eligible in 2002. Since that time Covenant has won several sectional titles in Boys Soccer, Boys and Girls Basketball, Baseball, Softball, and Boys and Girls Tennis, as well as some individual titles in Swimming and Track & Field. Boys Soccer advanced to the Class 1A State Finals in 2012, 2017, and 2018, while Girls Basketball and Girls Volleyball were both Class 2A State Runners-Up in 2017.

CCHS joined the Circle City Conference during the 2017-18 school year, and became the sixth official participating member of the conference for the 2018-19 school year.  The CCC includes Bishop Chatard HS, Brebeuf Jesuit Preparatory, Guerin Catholic HS, Heritage Christian School, and Roncalli HS.  Due to competitive balance concerns, Covenant does not compete in the CCC in Football.  The Warriors will however, participate in all other sports in which the school fields teams.

Covenant is also a member of the Indianapolis City Alliance. The City Alliance is a group of 14 schools within Indianapolis, which sponsors City Tournaments for each sport. The City Alliance includes other private schools such as Heritage Christian, Cathedral, Bishop Chatard, Cardinal Ritter, and Scecina Memorial, the Indianapolis Public Schools (Arsenal Tech, Crispus Attucks, Shortridge, and George Washington), Emmerich Manual, T.C. Howe, and Herron HS. Covenant has won City titles in Boys Soccer (2003, 2007, 2008, 2014, 2016) and Girls Track & Field (2009), as well as individual City titles in Swimming, Tennis, and Track & Field.

Covenant has also been a member of the National Christian School Athletic Association (NCSAA) since 2004. With the restrictions on each program’s schedule and travel distance placed on Covenant by the IHSAA, the Warriors are not able to participate in many NCSAA events, but have sought to support the spread and quality of Christian school athletic programs through this group whenever possible. Covenant athletes are regularly recognized on the NCSAA honor teams at the regional and national levels.