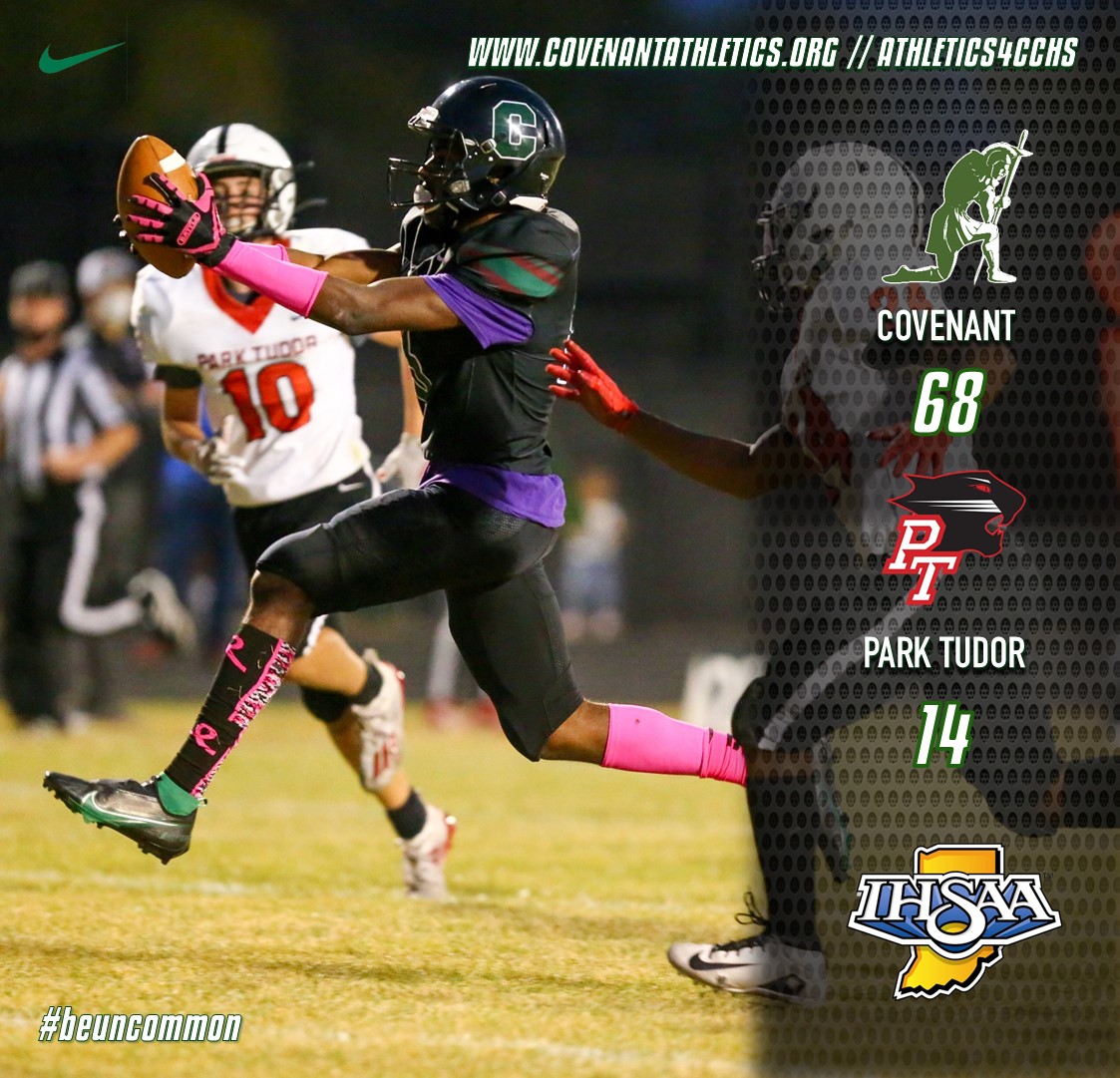 The Football team (8-0) remained undefeated on the season on Friday night, defeating Park Tudor (4-2) 68-14.  It did not look like it would be a lopsided result early on, as the Panthers jumped out to a 7-0 lead on their first possession.  PT Freshman quarterback D.J. Gordon took advantage of a break down in the Covenant secondary and hit C.J. Thompson on a 71 yard pass play for the game’s first score.  The early score was the first time all season that the Warriors have trailed.

It got even dimmer for CCHS, as Senior Austin Frazier overthrew his target on his first passing attempt on the Warriors’ first offensive play, leading to a PT interception.  The Panthers took over on the Covenant 35 yard line.  The CCHS defense stood tall, as they turned PT over on downs.  After continuing to struggle to get in sync on their first three downs of their second possession, Frazier hit Senior Micah Wilson on a short out route which Wilson juked and slipped through traffic 60 yards to tie the score.

On the first play of their next possession, Gordon got rid of the ball just as he was getting pulled down.  The ball was deflected at the line, but fell into the hands of Junior Aaron Roach, who did not get taken down until he was inside the Warriors’ 20 yard line.  The Covenant defense stood strong again, as Senior Adrian Terry picked off a Gordon pass in the end zone.  And it did not take long for Frazier to convert, as his hit Senior Bryan Lomax on an 80 yard pass play on the next play.  The two big plays helped turn the momentum of the game, as Covenant would never relinquish the lead.

After forcing a PT punt, Covenant marched right down the short field and Frazier threw his third touchdown pass of the first quarter, his second to Lomax, on a 30 yard post route. Frazier kept up his suddenly hot hand, as on the next drive, hit Senior Jay Wright on a 20 yard corner route with great touch.  CCHS missed the PAT, but led 27-7.  Gordon snapped the Warriors’ streak of 27 unanswered points with a 6 yard touchdown scramble.  Covenant closed out the first half when Frazier threw his fifth touchdown of the game with just six seconds left in the half, hitting Lomax on a 26 yard pass.  It was Lomax’s third TD catch of the night.

But Lomax was not quite done.  He set a new program record on the opening kickoff of the second half, taking it 93 yards to expand the Warrior lead to 41-14.  The CCHS defense ramped up even more in the second half, giving up just seven yards in the final two quarters.

On the Warriors’ next drive, Frazier hit Senior Adrian Terry on a 15 yard touchdown pass, Frazier’s sixth of the game.  Six touchdown passes in a game is a new program record.  The previous record was five, set by Emery Brough (Class of 2018) vs. Oldenburg Academy in 2016.  Senior Gage Coffey got in the end zone on a 5 yard run early in the fourth quarter to push the Covenant lead to 55-14.  Senior Trey Flatt strip sacked Gordan in the middle of the fourth, picking up the loose ball and returning it 27 yards for a touchdown.  Coffey found the end zone one more time late in the game to close out the scoring.

Frazier also set a new program record for most passing yards in a game with 281 on 9-of-16 passing with six touchdowns.  Frazier’s six touchdowns also gave him the most TD passes in a season (26). Coffey ran the ball 12 times for 117 yards.  Lomax caught three balls for 138 yards and three touchdowns to go with his record-setting 93 yard kickoff return.  Lomax tied a program record for scoring in a game with 24 points, tying Jonah Bronger’s record from 2018 against Tindley and Shortridge.  Wilson had three receptions for 100 yards and a touchdown.

The Warriors will close out the regular season against Oldenburg Academy.  The game, originally scheduled to be on the road, has been moved to a home game at Zionsville West MS at 7:00p.  CCHS will then open up the state tournament at Edinburgh HS on October 23 at 7:00p.