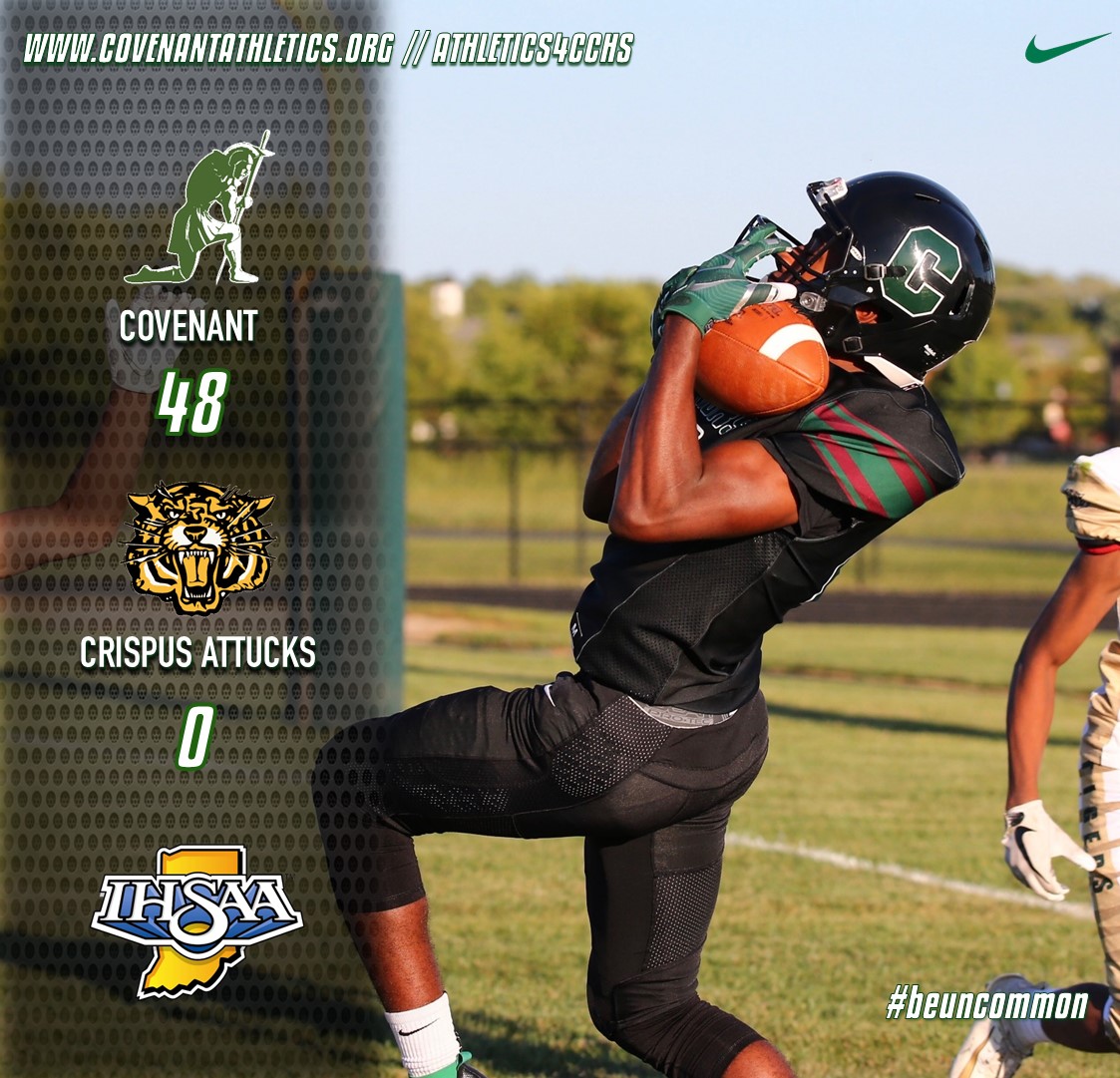 The Football team (3-0) made another big statement by blowing out a large school, this time beating Crispus Attucks HS 48-0 on Friday night.  The program was able to honor the fifteen graduating seniors and their families as well as the Cross Country and Drumline seniors.

The Covenant offense got going quickly, scoring on each of their first two possessions.  Senior quarterback Austin Frazier hit Senior B.J. Lomax over the top in the corner of the end zone for a 16 yard touchdown to open the scoring less than two minutes into the game.  After forcing a CAHS punt on their first possession, CCHS drove the ball down the field again, finishing on a 2 yard sweep by Senior Gage Coffey.  The Warriors failed to convert the point after attempt to lead 13-0.

Senior Adrian Terry got his second pick-6 in as many weeks on the next Tiger possession, as Terry jumped a pass to the flat for the interception and score.  Covenant converted the 2-point conversion on this score to lead 21-0 with 2:42 left in the first quarter.

Senior Micah Wilson got into the action in the second quarter, as he found the end zone twice, on his way to a 10 rush, 122 yard night.  Wilson got the house the first time on a 30 yard run less than three minutes into the second quarter.  He shimmied through the Tiger defense again five minutes later with an 18 yard scamper.  Terry closed out the first half scoring, taking a short slant 40 yards to make it 42-0 just before the half.

The only second half scoring came in the way of Coffey catching a 47 yard strike over the top from Frazier.  Junior Will Lyons intercepted Tiger quarterback Caleb Davenport to preserve the shutout late in the fourth quarter.

Frazier ended the night 8-for-12 for 175 yards with three touchdowns.  The Warriors outpaced the Tigers 400-61 in total offense.  Covenant will hit the road for the first time in 2020 next week, as they travel to George Washington CHS on Friday, September 11 at 7:00p.  The game will be webcast live on Indiana SRN.