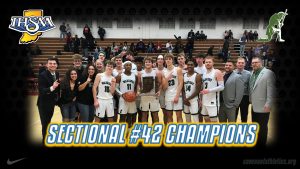 Saturday’s sectional final was intense, with the energy in the gymnasium at Scecina Memorial HS very high, as would be expected for a closely contested state tournament game.  Covenant used solid full-court pressure to jump out to a 10-2 lead early in the first quarter, but the Panthers rallied out of a timeout with 1:44 left in the quarter, finishing the first on an 8-3 run to close out the frame with a 13-10 Covenant lead.  The Warriors’ defense led the way in the second quarter, as they held PT to just five points in that period, all of which came from Junior J.C. Glenn.  Covenant Senior Ethan Maudlin hit a buzzer-beating jumper over the defense to close out the first half, giving CCHS a 24-15 lead going into the break.

The Warriors were strong coming out in the third quarter, extending their lead to as many as 12 points, before Park Tudor closed the gap to 39-32 late in the third.  After Senior Noah Hedrick had led Covenant with 8 points in the first half on two 3-pointers, Senior Cam Shurig stepped up in the third, pouring in 8 of his 12 points during that quarter.  The Panthers hot shooting and back-to-back old fashioned three-point plays got PT as close as 44-43, but Sophomore Brock Buckley stole a rebound from a Panther defender and put it in and then finished in traffic to extend the Warriors’ lead back out to 48-43.  Covenant sealed the game on a 10-2 run, hitting six foul shots down the stretch, as the Panthers were forced to foul late.  CCHS was 12-for-12 from the line on the night.

Junior Trey Flatt scored seven of his game-high 14 points in the fourth to help seal the game.  Buckley and Senior Sam Fulbright each had 5 rebounds.  Hedrick ended up with 10 points, 3 boards, and 2 assists.  The Covenant defense was a huge piece of the win, as they outscored the Panthers 22-5 off of turnovers, as CCHS caused 18 turnovers, while only giving up the ball 7 times.

Covenant advances to face #6 ranked South Decatur HS (24-2) in the Regional #11 at Greenfield-Central HS.  That game is scheduled for Saturday, March 14 at 10:00am.  SDHS defeated North Decatur HS 82-65 in the Sectional #44 final.  The other side of the Regional #11 bracket will pit the Sectional #41 champion, #1 ranked Shenandoah HS (23-2) against the Sectional #43 champion, #7 ranked Parke Heritage HS (23-3).  Shenandoah defeated Northeastern HS 54-42 in their sectional final, while Parke Heritage knocked off North Putnam HS 61-49 in their final.  The Regional #11 final is scheduled for a 8:00pm tip on Saturday.

CCHS advanced to the Sectional #42 final with two wins earlier in the week.  Covenant opened up state tournament play by holding off T.C. Howe CHS 53-48.  The Warriors overcame a 12-point deficit in the first half to rally for the win.  The Covenant defense pressured the Hornets into an up-tempo pace in the second half, and then held them off for the win.  Hedrick had 18 points in the win over Howe.  That win on Wednesday forced a matchup with Circle City Conference foe Heritage Christian in the semifinal on Friday night.  Covenant did not shoot the ball particularly well in the semifinal, not hitting a 3-pointer in a game for the first time this season, but turned the Eagles over 21 times to lead to the 49-35 win.  The Warriors depth and defense allowed Coach Scott Flatt to also rest some of his starters in the second half on Friday, to help prepare for Saturday’s final.  Shurig was the Warriors’ lone scorer in double figures on Friday, netting 16 points in the win.  Maudlin led CCHS with 4 assists on Friday, while the Covenant defense allowed just 14 second half points.

Covenant is looking for sponsors to help cover the cost of Indiana SRN to webcast the Warriors’ regional games.  If a sponsor is secured, SRN will webcast all three games of Regional #11.  Anyone interested in sponsoring the games should contact the athletic office.  All of the Warriors Sectional #42 games are available to view on-demand at www.indianasrn.org.