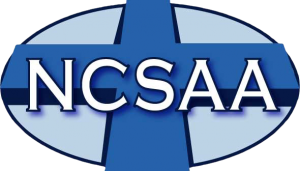 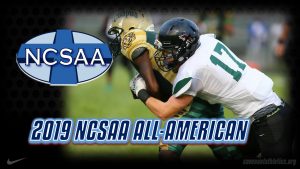 The National Christian School Athletic Association (NCSAA) released their 2019 Fall Sports Honor Teams yesterday.  The NCSAA uses coach and athletic director nominations to select players from Christian schools for All-American and Super Regional honor teams, as well as National Coach of the Year awards.  The Fall honor teams include the sports of Football, Fall Boys and Girls Soccer, and Girls Volleyball.  (Note: Due to soccer being played in different seasons in different parts of the country, the NCSAA also selects a winter honor team for boys and girls soccer).

Junior Linebacker Trey Flatt was selected by the NCSAA to the All-American Team on Defense.  Flatt led the Warriors in tackling, tallying 75 solo tackles and 74 assisted tackles for 149 total tackles (13.5 t/g), including 19.5 tackles for loss and 6.5 sacks.  Flatt also recorded an interception, 4 recovered fumbles, had 6 caused fumbles, and 4 blocked punts.  On the offensive side of the ball, Flatt rushed the ball 45 times for 232 yards and 6 touchdowns, and caught 23 passes for 243 yards and 3 touchdowns.  Trey also returned one punt 20 yards for a touchdown.

Flatt was joined on the Northeast Super Regional Team by fellow Juniors Quarterback Austin Frazier and Running Back Gage Coffey.  Frazier was 125-for-252 for 1573 yards, 15 touchdowns, and 9 interceptions.  Coffey, the Warriors’ Team MVP for 2019, rushed the ball 148 times for 878 yards and 11 touchdowns.  He also caught 30 passes for 401 yards and 2 touchdowns.  On defense, Gage led CCHS with 8 interceptions, while also tallying 17 solo tackles and 27 assisted tackles for 44 total tackles.  He also picked up one sack on the year to go with 6 passes defensed and 3 fumble recoveries.  2019 NCSAA Football Honor Teams.

Alex was selected to the City Alliance All-Tournament Team, as well as the All-Conference Team for the Circle City Conference in 2019.  For her career, David concluded her high school career with 63 goals and 34 assists in 70 matches.

In Girls Volleyball, Sophomore Cadee Notter was selected to the NCSAA Northeast Super Region Team.  Notter, a libero for a chunk of the 2019 season, recorded 225 digs, 63 aces, 83 assists, and 28 kills over 60 sets for the Lady Warriors, who lost to Scecina Memorial HS in the Sectional #42 final.  Notter was also selected to the All-City Team and City Alliance All-Tournament Team in 2019.