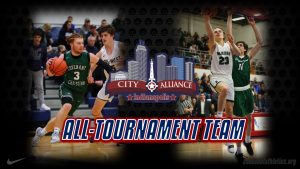 The City Alliance released the selections of the 2020 All-Tournament Team for the Boys Basketball City Tournament that was played in late January.  The team is selected by coach nomination after each round of the tournament, and then those nominations are selected for the honor team by the Tournament Director Kyle Neddenriep of the Indianapolis Star.  Selections are made based on City Tournament games only.

The City Tournament bracket is seeded using the Sagarin ratings.  Covenant went into the City Tournament as the #5 seed.  The Warriors defeated #12 Scecina Memorial HS 74-30 in the first round.  CCHS then pulled off an upset of #4 seed Arsenal Tech HS 102-90 in the quarterfinals.  #1 seed Crispus Attucks HS eliminated Covenant 96-69 in the City semifinals.  Attucks went on to win their first City title since 1962, defeating #2 seed Cathedral HS 94-91 in double overtime.