The Boys Basketball team (13-6, 4-1) has made great strides both in on-court results and in team culture in the last few years, but have struggled to win games against ranked teams.  However, the Warriors looked to rewrite that narrative on Saturday, as they welcomed the Trojans of Covington HS (12-5), the #8 ranked team in Class 1A, to Andrew Smith Court on the fourth annual Basketball Day Indiana.  The matchup, which ended up as a 62-61 win for Covenant, did not disappoint.

The Trojans fought hard to fend off the Warriors’ full court pressure early, taking a 14-10 lead after the first quarter.  Covenant, who struggled to hit shots from 3-point range early, adjusted to take their game inside, rallying with a 16-9 scoring run in the second, to hold a 26-23 halftime lead.  The Covenant defense forced CHS to hit a number of contested shots, as the two teams went back-and-forth, as CCHS clung to a one point lead heading into the final quarter.  The Warriors made a run through the first half of the fourth quarter, but Covington continued to battle.  Covenant struggled down the stretch from the foul line, hitting just 6-for-14 in the final eight minutes, unable to seal the game away.  The Trojans hit some tough shots down the stretch to get the game to 62-61 as they got the game’s final possession.  Covington Junior Logan Pinkerton got a contested mid-range jumper as the clock was winding down, but the shot rattled in-and-out as the Warriors held on for the win.

Senior Noah Hedrick scrapped for a team-high 15 points, despite shooting 1-for-5 from distance, to go along with 4 rebounds, 3 steals, and a block.  Junior Bryan Lomax continued his stretch of very efficient games, scoring 14 points on 5-for-6 shooting from the field and 4-of-6 from the line in 14 minutes, including a 7-point stretch in the first three minutes of the fourth quarter.  Junior Trey Flatt also netted 14 points, 2 rebounds, 2 assists, and 2 steals.  Senior Cam Shurig chipped in 6 points while leading the Warriors with 7 rebounds.  Pinkerton scored a game-high 18 points for Covington, while Senior Caleb Elmore scored 12 points, 8 rebounds, and 2 assists. 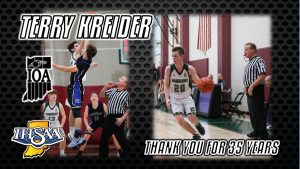 In addition to the festivities of Basketball Day Indiana, the Athletic Department was pleased to be able to recognize Terry Kreider, one of the officials for the varsity game.  Kreider is completing his 35th season as a high school basketball official, and this season will be his last.  He has officiated over 4000 games in his career, including several games at CCHS over the years.

Covenant will hit the road on Friday night to face another ranked team, University HS (15-4), the #5 ranked team in 2A, for a F/JV/V tripleheader at 4:30/6:00/7:30pm.  The JV team will then host their annual Valentines Shootout on Saturday.