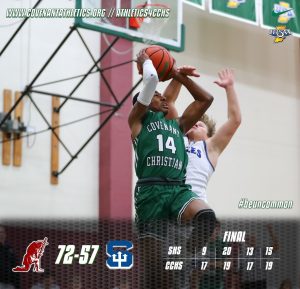 The Boys Basketball team (11-6, 4-1) rebounded with a win at Shortridge HS on Saturday night, downing the Blue Devils 72-57, to earn a split of their two games over the weekend.

The defensive effort was better on Saturday than the Warriors’ 50-47 loss at home to Providence Cristo Rey on Friday night, leading to better pressure, defensive rebounding, and opportunities to control the game and the tempo.

Covenant used solid ball movement to get open looks, leading to a better shooting percentage, taking a 17-9 advantage after the first quarter.  The second quarter was pretty evenly matched in terms of scoring, but CCHS steadily pulled away with a balanced scoring attack and use of a deep bench to wear down the Blue Devils.

Senior Cam Shurig hit two 3-pointers in second quarter, part of his team-high 14 points, and two of the Warriors’ 9-for-16 shooting from distance on the night.  Junior Trey Flatt also chipped in 13 points, while both Junior Bryan Lomax and Brock Buckley each reached double figures in scoring with 10.  Lomax had a perfect shooting night, going 3-for-3 from the field and 4-for-4 from the line, while Buckley grabbed 8 rebounds and had 3 assists.  Senior Noah Hedrick led Covenant with 5 assists, while Seniors Sam Fulbright and Ethan Maudlin recorded 6 and 4 rebounds respectively.  Senior guard Jaden Brookins led SHS with 16 points.

The Warriors will return to Andrew Smith Court on Thursday, as they host rival Speedway HS at 6:00/7:30pm, and then again on Saturday afternoon, as the Trojans of Covington HS visit the Fieldhouse.  Game times on Saturday are slated for 1:00/2:30pm.  The varsity games on both Thursday and Saturday will be broadcast on Indiana SRN.