The Athletic Department announced this afternoon that Dan Gietl will become the third head football coach in Covenant program history.  Gietl replaces Coach Tony Bowman, who was 6-5 in his one season at the helm for the Warriors. 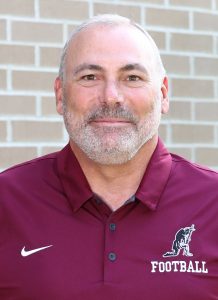 Coach Gietl is a familiar face on the Covenant sidelines, as he has been an assistant coach for the Warriors in 2015, 2016, and 2018.  Gietl came on the CCHS staff under Coach Larry McWhorter.  Gietl and McWhorter coached together at Zionsville CHS from 2002-2014, with Gietl serving in several roles with running backs, tight ends, and defensive ends.  He came to CCHS as an assistant coach in 2015, and was the Offensive Coordinator in 2016.  That season, the Warriors’ first undefeated regular season in program history, CCHS averaged 41 points/game.  After taking the 2017 season off to enjoy his son’s senior season at ZCHS, Gietl returned to Covenant as the Defensive Coordinator in 2018.  Again, the Warriors went undefeated in the regular season, giving up less than seven points/game.  Gietl is a National Healthcare Practice Leader at ProKarma.

The Warriors rebounded from a slow 2-4 start to the 2019 season, to finish the regular season at 5-4.  CCHS picked up their second sectional victory in program history by defeating C.A. Tindley AS 31-6 in the Sectional #46 opener, avenging a regular season loss to the Tigers.  Covenant then fell to #1 ranked Lutheran HS 28-15 in the sectional semifinal.