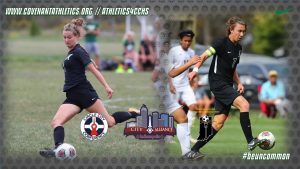 Several postseason honor teams for both the Boys and Girls Soccer teams have been released recently.  The All-Conference Team, All-City Team, All-City Tournament Team, as well as Academic and All-District and All-State teams as the state level have been released.  Despite not having as much success on the field as either team would have liked to have in 2019, CCHS athletes still picked up several postseason honors.

Five players made the Academic All-State Team through the Indiana Soccer Coaches Association (ISCA).  Senior Will Trapp, as well as Juniors Caleb Crane, Eli Martin, Darien Pugh, and Nathan Schmidt.  Qualifications for the Academic team are that players must be juniors or seniors, regular contributors on the varsity team, and must maintain a cumulative grade point average (GPA) between 3.7 and 4.0 on a non-weighted scale.

For the All-City Team selections, Senior Will Trapp and Martin were selected.  Trapp had a goal on the season while anchoring the Warriors’ defense.  Martin had two goals this season.  2019 All-City Boys Soccer Team.  Martin was also selected to the Circle City Conference All-Conference team.

On the girls side, Alex David was also selected to the 2019 Circle City Conference All-Conference Team.  David led the Lady Warriors with 11 goals on the season to go along with 2 assists.  For her career, Alex had 63 goals and 34 assists in 70 matches.

All-Conference and All-City Teams were voted on by all of the coaches in those associations based on coach nominations.