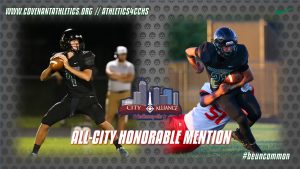 The All-City Football Team for this Fall was released this week.  Juniors Austin Frazier and Gage Coffey were both selected as All-City Honorable Mention.  The duo has helped to lead the Warriors to a 5-4 regular season mark and their second sectional win in program history.

Frazier, a three-year starter at quarterback, is 107-for-218 for 1398 yards passing, with 14 touchdowns and 9 interceptions through the first ten games in 2019.  Coffey has rushed for 854 yards on 140 carries, with 11 rushing touchdowns, while catching 27 passes for 364 yards and two touchdowns.  Coffey also has a defensive touchdown, recovering a blocked punt in the end zone.  Coffey is also fourth on the team in tackles on the defensive side of the ball, as well as the team leader with six interceptions.