To conduct the random drawing for the state tournament, the IHSAA places ping-pong balls representing each school in a given sectional
into a lottery-style air mix machine. A motorized fan in the bottom of the machine blows the balls around the inside of the transparent
container and air then forces each ball up through a tube in random order. For example, the first ball retrieved from the machine will be the visiting team in game one with the second ball representing the home team in game one. The third ball to come out is the visitor in game two and the fourth ball the home team in game two. That same method is followed through all sectionals and regionals to determine every team’s placement in the bracket. 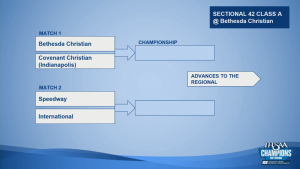 The Lady Warriors will compete in the Class 1A State Tournament, starting in Sectional #42 hosted at Bethesda Christian.  Sectional #42 includes four teams: Bethesda, Covenant, the International School of Indiana, and Speedway HS.  CCHS will face the host Lady Patriots of Bethesda on Thursday, October 10 at 5:00 pm.  BCS is ranked #15 in the ISCA soccer rankings for the week of September 23.  The other first round game pits SHS vs. ISI.  The Sectional #42 final will be on Saturday, October 12 at 7:00 pm.  The Sectional #42 winner will advance to Regional #11 at Heritage Christian. 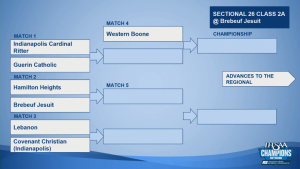 In the Boys Tournament, the Warriors will compete in Class 2A due to their strong finishes as State Runners-up in Class 1A in 2017 and 2018.  CCHS will play in Sectional #26 at Brebeuf Jesuit Preparatory School.  The sectional also includes 2018 Class 2A runner-up Cardinal Ritter HS, who is currently ranked #7 in this week’s poll, #3 Guerin Catholic HS,  Hamilton Heights HS, #18 Brebeuf, #17 Lebanon HS, and Western Boone HS.  CCHS will face Lebanon in the first round on Tuesday, October 8 at BJPS at 7:00 pm.  The CCHS/LHS winner will advance to the semifinals on Wednesday, October 9.  The Sectional #26 finals will be at 2:00 pm on October 12.  The Sectional #26 champion will advance to Regional #7 at Greensburg HS.