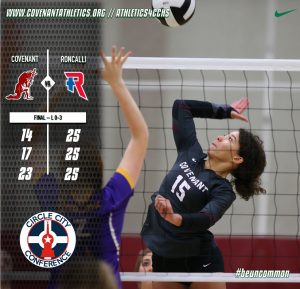 The Girls Volleyball team dropped to 0-2 in Circle City Conference play last night, falling 0-3 to Roncalli HS.  The Lady Warriors struggled through the first half of the match, losing the first game 14-25.  After digging a 10-24 hole in the second game, CCHS rallied to lose that game 17-25.  Covenant battled hard through the third game, holding a 23-22 lead late in the match, but lost the third game 23-25.

Freshman Dani Newport led the Lady Warriors with 8 kills and 2 digs.  Senior Sania Borom chipped in 6 kills, 3 digs, and an ace.  Sophomore Cadee Notter served up four aces to go with 15 digs, while Sophomore setter Elizabeth Schafer added one kill to go with her 18 assists and 6 digs.

The Lady Warriors will be on the road again on Thursday, as the JV and varsity travel to Western Boone HS for a 5/6:30 pm doubleheader.  The Freshman team will host Mooresville CHS on Thursday at 5:00 pm.