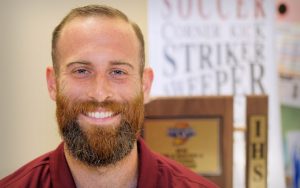 David Pfeifer was selected at the 2018-19 Circle City Conference Coach of the Year earlier this month.  The award, in it’s second year of existence, is awarded to a CCC coach who best exemplifies the conference’s mission of producing student-athletes of the highest character and ability.  The award is determined by a nomination process by the principals and athletic directors, and then voted on to select the winner.

Coach Pfeifer is the Assistant Athletic Director and Boys Soccer Coach at Covenant.  In two seasons at the helm of the Warriors Soccer program, Pfeifer has amassed a 30-14-1 record against arguably one of the toughest Class 1A schedules in the state, as well as back-to-back state runners-up finishes.

Both years that the Warriors were in the IHSAA state finals, it was noticed and applauded on social media the character and class in which Coach Pfeifer, his staff, and his team displayed throughout the game and the post-game award ceremonies.