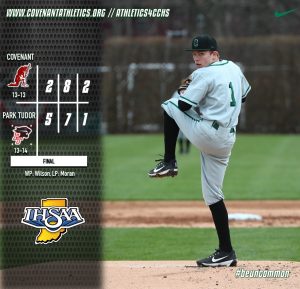 The Baseball team (13-13) closed out their season with a 5-2 loss to Park Tudor in the IHSAA Sectional #43 semifinal on Monday morning.  The team had too many self-inflicted mistakes that led to the loss.

Park Tudor opened the scoring in the bottom of the first inning, as the Panthers put together two doubles to plate one run.  PT added to their lead in the third.  Freshman Brock Buckley relieved Junior Brennan Moran on the mound with one out and men on second and third, but PT scored two runs on two wild pitches to lead 3-0.

CCHS got one run back when Junior Jack Hensley singled to left field to drive in Sophomore Darien Pugh.  Park Tudor scored two insurance runs in the bottom of the sixth inning to lead 5-1.  Covenant scored one run in the seventh and had another thrown out at the plate to fall 5-2.

Park Tudor advanced to face Speedway HS in the sectional final, losing a back-and-forth affair 20-11.  Speedway will move on to face South Vermillion HS, the Sectional #44 champion, in the regional semifinal.  Hagerstown HS will face Scecina Memorial HS in the opposite side of the regional bracket.