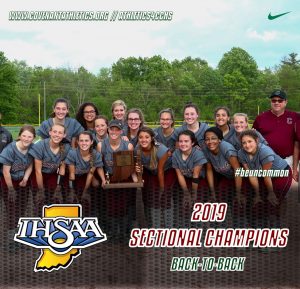 The Softball team (15-7-1) had to battle down to the final outs of Thursday’s IHSAA Sectional #58 final versus Bethesda Christian, but CCHS rallied to walk off a 7-6  win over the Lady Patriots to win their second straight sectional title.

The game started as a back-and-forth affair.  CCHS manufactured two runs to lead 2-0.  Bethesda scratched back to even the score in the fourth inning.  Despite BCS limiting the high-powered Covenant offense, the Lady Warriors seemed to have the game in hand with a 5-2 lead going into the top of the seventh inning.  Bethesda battled back to load the bases and then Junior Rachel Scafer hit a grand slam to take a 6-5 lead.  However, the CCHS offense wasn’t done.  Things seemed to get dimmer though, as Freshman 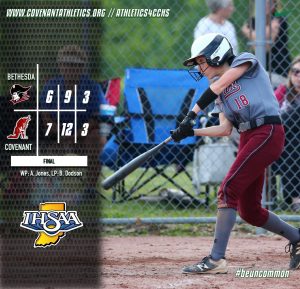 Morgan Yeater was thrown out at third base on a bang-bang play trying to stretch a leadoff double into a triple in the bottom of the inning.  Covenant scored to tie the game when Freshman Erica Gruesser singled on a ball that dropped on the left field line to drive in pinch runner Sophomore Anna Kegeris.  Sister Sophomore Nicole Gruesser followed up to drive in the winning run by singling off of the third base bag.

Sophomore Aubrey Jones came on in relief of Sophomore Brooklyn Bond with one out in the fourth inning.  Despite giving up grand slam in the seventh inning, Jones pitched 3.2 innings to pick up the win.