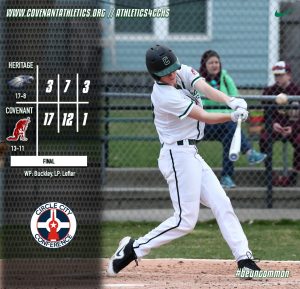 The Baseball team (13-11) earned a weekend split in the inaugural Circle City Conference Tournament.  The Warriors played one of their worst games of the season on Friday night, falling to #4 seed Bishop Chatard HS 12-2.  CCHS bounced back on Saturday afternoon, downing #6 seed Heritage Christian, 17-3.

The Covenant defense struggled mightily on Friday night, as the Warriors struggled to get out of the fourth inning after closing the deficit to 4-2 in the top of the frame.  The Trojans scored five unearned runs in the bottom to push their lead to 9-2, effectively sealing the game.  The loss moved the Warriors into the consolation game of the tournament against Heritage Christian, who fell to #3 seed Brebeuf Jesuit Prep, 8-1 in the first round on Friday.

The Covenant offense struck early after giving up a run in the first inning, scoring 12 runs of their own in the bottom of the first inning.  CCHS utilized six hits, five walks, a hit by pitch, and two HCS errors on their way to the big inning.  Freshman Brock Buckley pitched the first two innings of the game, giving up one run on three hits for the win.  Junior Jack Hensley and Senior Jake Brackett pitched in relief.  Buckley picked up five RBIs in the win.

The Warriors have added a game to close out the regular season due to a bye in the first round of sectional play, as they will host the #2 team in Class 2A, Lafayette Central Catholic HS on Tuesday at 5:30 pm.