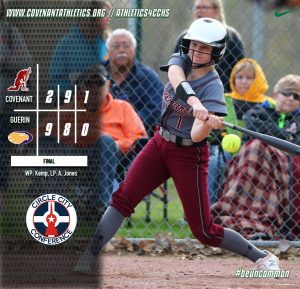 The Softball team (12-7-1) closed out the regular season with a 9-2 defeat to Guerin Catholic HS on Saturday in the #3 versus #4 matchup in the Circle City Conference Day of Champions at Roncalli HS.

The Lady Golden Eagles picked up five runs in the first inning off Covenant starter Sophomore Aubrey Jones, including a grand slam.  GCHS added four more runs in the sixth inning before Covenant got two runs on the board as Freshman Morgan Yeater drove in two.  Jones went four innings in the circle, relieved by Sophomore Brooklyn Bond for two innings.  Seniors Sydney Jones and Bailey Everett each collected  two hits on the day.