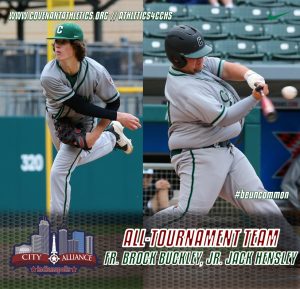 The City Alliance released the All-Tournament Team for the 2019 City Baseball Tournament on Monday.  The Tournament concluded on Friday night with Covenant, making it’s first finals appearance in program history, falling to Cathedral HS 2-0.  Cathedral won its 20th overall City title, and its 16th since 2000.  The All-Tournament Team is made up of players, nominated by the City coaches, and then selected by a panel of media that observed the tournament.

Covenant had two players selected to this year’s All-Tournament squad.  Freshman Brock Buckley pitched two complete games in the semifinals when CCHS upset #1 seed Bishop Chatard HS 4-2.  Buckley gave up just one earned run in seven innings, allowing six hits while striking out two and walking three in the win over Chatard.  Buckley also pitched a complete game in the final versus Cathedral, again giving up just one earned run on four hits while striking out two and walking four.  Hensley came up big with his bat in both the quarterfinals against Scecina Memorial HS and the semifinals versus Bishop Chatard.  Hensley’s bases loaded triple broke the game open against Scecina, helping the Warriors to a 16-10 win.  He also hit a 2-RBI double versus Chatard to drive in Covenant’s third and fourth runs.

Cathedral HS had three players represented on the All-Tournament Team, including Senior pitcher Peyton Schofield, who picked up wns for the Irish in both the semifinals versus Heritage Christian and the finals against CCHS.  2019 All-Tournament Team.