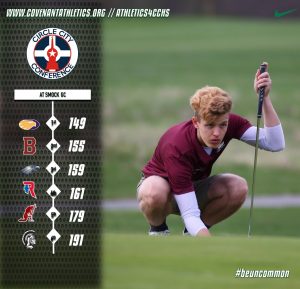 The Boys Golf team played in their first ever Circle City Conference Championships last night at Smock GC.  The Championships, originally scheduled as an 18-hole affair on April 20, were rained out and rescheduled as a 9-hole competition last night.  CCHS shot a 179 as a team, taking fifth place in the conference.

Guerin Catholic HS had four golfers within two strokes of the lead on Monday, including Keaton Modleski, Conner McNeely, and Andrew White, who all shot 37 to tie Roncalli’s Luke Poole for medalist honors.  GCHS shot a 149, followed by Brebeuf Jesuit Prep at 155, Heritage Christian at 159, and Roncalli HS at 161.  Bishop Chatard HS took sixth place with a 191.  2019 CCC Championships Official Results.

The Warriors will face Decatur Central HS on Wednesday at 4:30 pm at Winding River GC.  This match was originally scheduled for Monday, but had to be moved due to the rescheduling of the conference championships.  CCHS will then close out the week with the Franklin Central Invitational at Smock GC on Saturday.