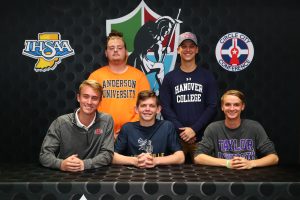 The Covenant Athletic Department held a second Signing Night in the 2018-19 school year on Thursday night, for five CCHS seniors who signed their national letters of intent to attend the school of their choice and continue their athletic careers at the collegiate level this Fall.  Seniors Jake Brackett (baseball), Andrew Coleman (football), Grant Meadows (golf), Gabe Byrd (soccer), and Justin Foster (Track & Field). 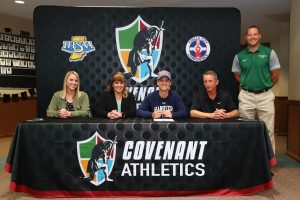 Jake Brackett signed his letter of intent to attend Hanover College (Hanover, IN) and play baseball.  Brackett is a 4-year starter at shortstop on the varsity baseball team.  He and his senior classmates have had a huge impact on the culture of the Covenant Baseball program.  Brackett is currently second on the team in batting average (.403) and runs scored (16), and tied for first in RBI, while playing solid defense with just seven errors on the year (.892 fielding percentage).  Jake plans to study Sport Management at HC.  His career highlights include winning sectionals in 2018 and playing in the City Tournament final at Victory Field in 2019.  Brackett was also a four-year player in the CCHS Tennis program. 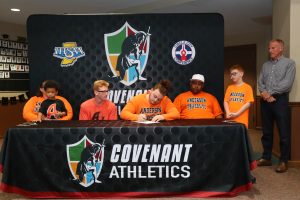 Andrew Coleman signed his letter of intent to attend and play football at Anderson University (Anderson, IN).  Coleman was a 4-year starter for the Warriors, becoming the program record holder for multiple things, including sacks in a game (4), sacks in a season (10), sacks in a career (14), tackle for loss in a season (11), and fumbles caused in a career (6).  Coleman plans to study Cinema Arts at AU.  He was a part of two undefeated regular seasons at Covenant (2016, 2018), as well as being a key cog in the building of the football program in its first five years. Coleman played baseball at CCHS during his freshman and sophomore years and as a thrower in the track & field program in 2019. 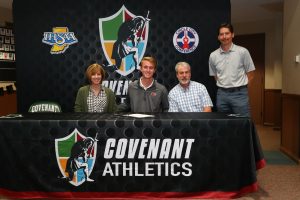 Grant Meadows will attend Indiana Wesleyan University (Marion, IN) next year, planning to play golf for the Wildcats.  Meadows is a key piece of this year’s Covenant Golf team after transferring to CCHS from Brownsburg for the 2017-18 school year.  Meadows helped the Warriors to a fourth place finish in the City Tournament this season, as well as advancing out of the sectional to compete in the IHSAA Regional in 2018.  Meadows is heavily involved at CCHS in soccer, DECA, National Honor Society, Student Council, and Theatre.  He plans to study Business Management and Economics at IWU. 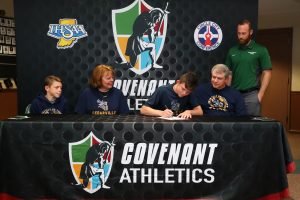 Gabe Byrd signed his letter of intent to attend and play soccer at Cederville University (Cederville, OH).  Byrd was a critical component in the 2017 and 2018 Covenant soccer teams that were IHSAA Class 1A State Runners-up.  Byrd recorded 20 career goals and 57 total points as a midfielder for the Warriors, including a hat trick in the 2017 regional finals.  Byrd, who has been a member of the National Honor Society and Math Club at CCHS, plans to study Mechanical Engineering at Cederville. 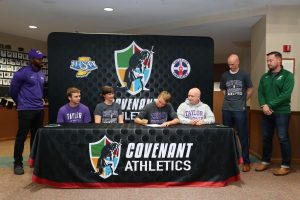 Justin Foster signed his letter of intent to attend and run track at Taylor University (Upland, IN).  Foster plans to study Business Management Systems at Taylor.  In addition to being involved in Orchestra at CCHS, Foster has also set the track program records as a member of the 4x400m relay team in 2018 (3:30.89) and 4x800m relay team (8.18.36), as well as placing fifth in the Hoosier State Relays in 2016 in the 4x800m.  Foster also became the first Warrior in program history to become a Circle City Conference Champion in the 400m.  Foster’s personal record in the 400m is 50.97, less than .6 seconds off of the program record of 50.39 (Todd Canal, 2011).