Covenant Christian High School was named the Crossroads Officials Association Sportsmanship Award winner for 2018-2019.  The association gives this award “to a school that shows outstanding sportsmanship to the other teams and to the officials working the school’s events.”  Coaches David Pfeifer and Sam Schinderle were present to receive the award, where they and the boys soccer team were highlighted for their sportsmanship demonstrated at the State Final and throughout the soccer season. 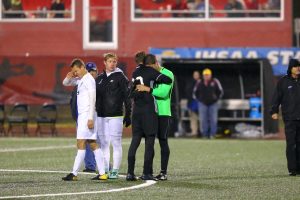 Recent winners of the award include University High School (2018), Lawrence North (2017), Greenfield Central (2016) and New Palestine (2015).  The COA was established in 2002 with a theme “To serve and support officials to reach full potential.”  There are over 300 members that serve 10 sports including baseball, basketball, football, soccer, softball, swimming & diving, track & field, cross country, volleyball and wrestling.
Sep
30