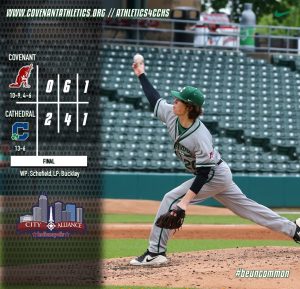 The Baseball team (10-9) made their first appearance in the City Tournament finals on Friday night, losing to Cathedral HS 2-0.  The Irish won their twentieth City championship in program history, and their sixteenth since 2000.

Freshman Brock Buckley toed the rubber for Covenant, pitching a complete game, giving up two runs, one earned, on four hits, while striking out two and walking four.  Cathedral senior Peyton Schofield got the win for the Irish, pitching five innings, giving up four hits and striking out eight Warriors.  Senior Derek Haslett pitched the final two innings to pick up the save.

The Irish got on the board in the first inning, stringing together two hits, driving in Senior Cole Vassilo.  CHS got their second run when Sophomore Camden Jordan was hit by a pitch with the bases loaded.

Covenant outhit the Irish six to four, but could not get the clutch hit when they needed it, as they left nine runners on base.

CCHS will honor their three graduating seniors of the Class of 2019 and their families on Saturday, as they host South Putnam HS at 11:00 am and the Indianapolis Kings at 2:00 pm.