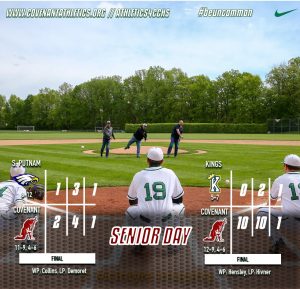 The Baseball team bounced back from their City finals loss on Friday night with two wins on Saturday, defeating South Putnam HS 2-1 in their first game and the Indianapolis Kings 10-0 in the second game of the split doubleheader.  The Warriors celebrated their three graduating seniors, Jake Brackett, Cam Collins, and Nick Wilson, and their families before the first game.

The Warriors got their two runs, as Sophomore Darien Pugh beat out an infield hit before stealing second base.  Brackett grounded out to short, but moved Pugh to third base.  Collins bunted for a base hit and then also proceeded to steal second.  Junior Brennan Moran then doubled inside the third base bag to drive in both runs.

In the second game, Covenant beat the Kings in five innings, scoring ten runs.  The Warriors pounded out ten hits, scoring four runs in the first, three in the second, and three more in the fifth inning.  Collins opened the scoring with a sacrifice fly to drive in Pugh.  Freshman Brock Buckley also drove in two runs in the first inning with a single.  Junior Jack Hensley then drove in Buckley with a single to center.  Buckley drove in two more with a double to right field in the fourth inning.  The Warriors closed out the scoring when Pugh stole home with the bases loaded.  Wilson made his pitching debut, pitching a scoreless fifth inning.

CCHS will host Greencastle HS on Monday, making up a game that was rained out in late March.  They will then hit the road on Wednesday night at Indian Creek HS, before competing in the Circle City Conference Tournament on Friday and Saturday.