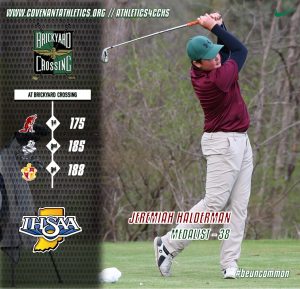 The Boys Golf team got to play another one of the area’s prettiest courses on Wednesday night, defeating Scecina Memorial HS and host Speedway HS at Brickyard Crossing.  A night after playing in the Crooked Stick Invitational, CCHS won Wednesday’s three-way match, scoring a 175.  Scecina shot a 185, while the Sparkplugs shot a 188.

Freshman Jeremiah Halderman had a great night, shooting a 38 for the match’s medalist honors.

After three matches in three nights, the Warriors have a bit of time off until Monday, when they will make up the Circle City Conference Championships at Smock GC at 4:30 pm.  The CCC Championship was postponed due to weather earlier in the season.