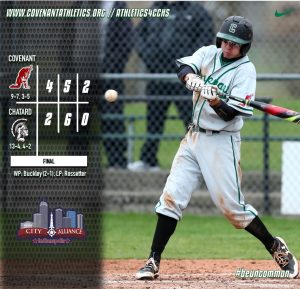 The Baseball team (9-7, 3-5) hung on to defeat Bishop Chatard HS 4-2 on Friday night in the City Tournament semifinal.

The #4 seed Warriors jumped out to an early lead over the #1 seed Trojans, as Sophomore Darien Pugh homered in the top of the first to stake Freshman pitcher Brock Buckley to a 1-0 lead.  Covenant picked up another run in the third inning, as Sophomore Blane Bradford singled to left to score Senior Jake Brackett, but Senior Nick Wilson was tagged out at the plate trying to score from second.

Chatard tied the game up at two in the bottom of the fourth inning. The Trojans manufactured their first run, as they utilized a walk, stolen base, sac fly and a ground out to second.  After a double and another walk, two CCHS throwing errors allowed a second run to score.

The game remained tied at 2-2 into the sixth inning, when Junior Jack Hensley doubled down to the left field corner to drive in Junior Brennan Moran and Buckley for a 4-2 lead.

Buckley made the lead stand up, picking up his only two strikeouts of the game in the seventh inning, as well as picking off a runner off of first base. Buckley threw a complete game, giving up one earned run on six hits, while walking three and striking out two.  The Warriors managed four earned runs on five hits, while the Trojan pitching staff walked eight and struck out three.

The win advances the Warriors to the City final, which will be played Friday, May 10 at Victory Field.  CCHS will face the winner of #2 Cathedral HS/#6 Heritage Christian, who are scheduled to face off on Saturday afternoon at Bishop Chatard HS at 3:30 pm.  This will mark the first time in program history that Covenant has advanced to the City final in baseball.  The game will be broadcast live on Indiana Sports Radio Network (SRN).

Covenant kicks off a busy week on Monday leading up to the final, as the JV travels to Chatard on Monday night, followed by a 2-game home/away Circle City Conference series versus Bishop Chatard on Tuesday and Wednesday.  The Warriors will then close out the week celebrating Senior Night on Saturday by facing South Putnam HS at 11:00 am and the Indianapolis Kings at 2:00 pm.