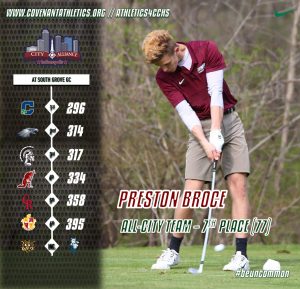 The Covenant Golf team competed in the City Tournament on Thursday at South Grove GC, shooting a 334 to finish in fourth place.  Cathedral HS shot a 296 to take first place overall, while Heritage Christian’s Drew Pickering outpaced the field by five strokes with a 67.  Covenant Freshman Preston Broce made the All-City Team by finishing in the top ten, seventh place overall as an individual, with a 77.  2019 Boys Golf City Tournament Official Results.

The Boys Golf team will tee it back up on Tuesday at 2:00 pm at Crooked Stick GC in the Crooked Stick Invitational hosted by Zionsville CHS.