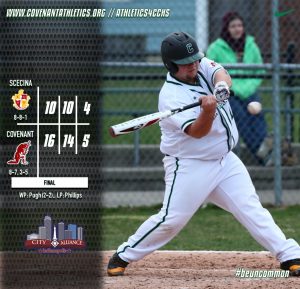 The Baseball team rode some hot bats on Wednesday night and into Thursday for a 16-10 quarterfinal win over #5 seed Scecina Memorial HS in the City Tournament.  The #4 seeded Warriors held a 14-7 lead going into the bottom of the fourth inning on Wednesday night when the rain forced a suspension of the game.  CCHS and the Crusaders picked up where they left off at Bishop Chatard HS on Thursday to complete the game.

Covenant got on the board quickly against SMHS lefthander Junior Owen Begley, scoring two runs with two outs in the first and another in the second.  Some miscues defensively led to a big inning for the Crusaders in the top of the third, as Scecina rallied back for a 7-3 lead.  But the Warriors knocked Begley out of the game and did some damage in the bullpen, as CCHS put up 11 runs in the bottom of the third and take control of the game back from the Crusaders.

Junior Jack Hensley picked up the biggest hit of the night, a bases clearing triple to drive in three of his four RBIs for the game.  Senior Cam Collins also drive in three runs, while Senior Jake Brackett, Sophomore Darien Pugh and Junior Brennan Moran all drove in two runs each.

Collins also came on in relief in the top of the fourth inning and then closed out the game to pick up the save.  Pugh was the beneficiary of the big third inning to move to 2-2 on the season on the mound.

The win advances the Warriors to the City semifinals on Friday night at Chatard against the #1 seeded Trojans at 5:00 pm.  BCHS defeated #8 seed Shortridge HS 11-3.  On the other side of the bracket, #6 Heritage Christian pulled the upset over #3 seed Cardinal Ritter, 11-6.  Their quarterfinal contest was also suspended due to weather on Wednesday, and they completed their game on Thursday as well.  The Eagles of HCS move on to face #2 seed Cathedral HS on Friday.  Cathedral defeated #7 Herron HS 18-0 in their quarterfinal on Wednesday.  2019 City Baseball Tournament bracket.

Both semifinal contests, as well as next Friday’s City Tournament final at Victory Field, will be broadcast live on Indiana SRN, beginning with the pre-game show fifteen minutes before the first pitch.