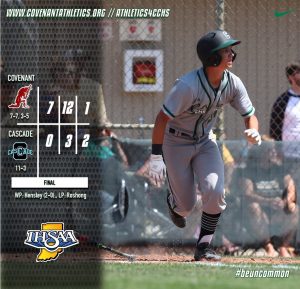 The Baseball team (7-7, 3-5) got back to .500 for the season on Saturday, with a 7-0 win over Cascade HS at CHS.  Junior Jack Hensley and Senior Jake Brackett combined to give up just three hits and shutout the Cadets.  The Warriors and Cadets could see each other again in a few weeks, as both teams will battle for the Sectional #44 title at Park Tudor at the end of May.  Covenant defeated Cascade 14-8 in eight innings in last year’s sectional final.

CCHS got the scoring started early, as Brackett led off by hitting a double down the left field line on the game’s first pitch.  Senior Nick Wilson came up second and was hit by a pitch.  Sophomore Darien Pugh singled to right field to load the bases.  Senior Cam Collins singled up the middle to score two runs.  Pugh was thrown out at the plate trying to score on a wild pitch, but Sophomore Blane Bradford singled to left field to score Collins, as Covenant led 3-0 after one inning.

The Warriors scored again in the third, as Collins’ hard ground ball up the middle was booted by Cascade shortstop A.J. Sanders, scoring Wilson.  CCHS knocked out Cadet starting pitcher Zac Roshong out in the middle of the third.  Hensley helped his own cause with an RBI single to left field off of new pitcher Dane DuBois, that scored Collins.  Covenant added single insurance runs in both the sixth and seventh innings.  Brackett went 3-for-4 on the day with an RBI.  Collins went 2-for-4 with three runs batted in, while Hensley went 2-for-3 with an RBI.  Covenant pounded out 12 hits on the day.

Hensley pitched 5.2 innings, giving up just three hits while striking out four and walking one Cadet.  Brackett gave up no hits in his 1.1 innings on the mound to help close out the win.

CCHS will open up City Tournament play at Warrior Park on Wednesday at 5:30 pm.  The #4 seeded Warriors will host the winner of #5 Scecina Memorial HS/Crispus Attucks HS, who will play at SMHS on Monday night.