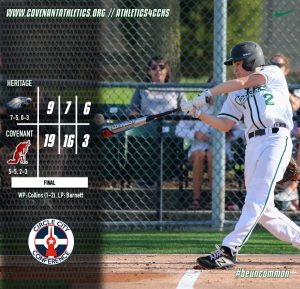 The Baseball team (5-5, 2-3) won a slugfest at home on Tuesday, defeating Heritage Christian 19-9 in a Circle City Conference matchup.  The top of the Warriors’ lineup pounded the ball, as the top three hitters, Junior Brenna Moran, Senior Jake Brackett, and Sophomore Darien Pugh pounded out 11 of the 16 Covenant hits, driving in 10 runs.  Senior Cam Collins also had three extra base hits with an RBI.  Pugh was 3-for-3 with two triples and a double knocking in five runs.

The first three innings were a scorefest, as Covenant led 10-9 after three innings.  The Warriors then continued to slug, pounding the Eagle bullpen, as they scored six times in the fourth inning and three more in the fifth to end the game.

Collins pitched three innings in relief giving up just one run to pick up the win on the mound.

CCHS travels to Heritage on Thursday night for the second game of the CCC 2-game series.