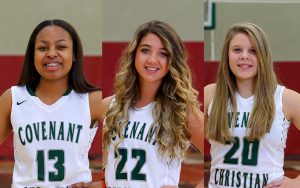 The All-City Team and All-Tournament Team for the City Tournament for Girls Basketball were released this week.  The All-City Team, sponsored by the Marion County Coaches of Girls Sports Association (MCCGSA), is an honor team based on the player’s season, as nominated by the head coach and voted on by the coaches of the City Alliance.  The All-Tournament Team is selected by a panel and is based on a player’s performance in the team’s City Tournament games.

The Lady Warriors may also see some honor team recognition later in the year, as the All-Conference Team for the Circle City Conference should be released later this month and the National Christian School Athletic Association (NCSAA) will released their Super Region and All-American Teams this summer.