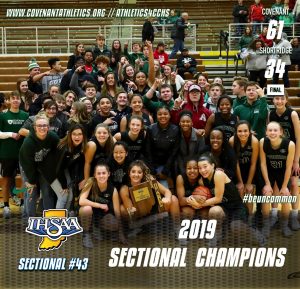 The Lady Warriors used a balanced scoring attack and a mixture of half court and full court pressure to force the Lady Blue Devils into several turnovers throughout the game.  CCHS used that pressure to jump out to a quick 20-9 lead after the first eight minutes.  Shortridge battled back to cut the lead to 20-16 in the middle of the second quarter before Covenant pushed the lead back out to 32-18 by halftime.  The third quarter saw the Lady Warriors continue to stretch the lead, leading 48-26 after three.

To say that the press is working for @athletics4cchs would be an understatement. Here's another easy basket for Williams-Harris off of Everett's steal. @indyhsscores pic.twitter.com/2x4NVVzTXb