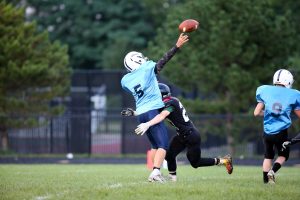 The Covenant Football team (1-0) opened up the 2018 season with a resounding 61-0 win over Jasonville Community on Friday night at Zionsville West Middle School.

CCHS dominated the game throughout on both sides of the ball, limiting the Lakers to virtually no yards offensively, and scoring early and often.  Senior Jonah Bronger got the offense going early, scoring on the Warriors’ first offensive play from scrimmage, taking the ball on a sweep 39 yards for a touchdown.  Bronger ended the game with four rushes for 61 yards and three touchdowns.  Sophomore Cage Coffey also carried the bulk of the load on the ground, rushing six times for 94 yards and a touchdown.  Freshman Trey Replogle picked up four rushes dor 26 yards, while Senior Austin Anderson ran twice for 19 yards and a touchdown. 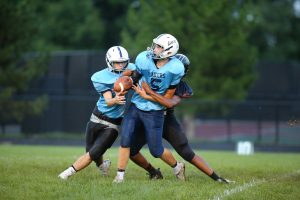 Sophomore quarterback Austin Frazier was 4-for-5 throwing the ball for 55 yards and a touchdown, while Sophomore Ben Bradley also threw for a 15 yard touchdown pass to Sophomore tight end Caleb Probst.

The Warriors will hit the road next Friday, traveling to St. Joseph’s University in Ohio to take on Oldenburg Academy.  The Twisters defeated Rock Creek Academy in their week 1 matchup, 28-13.  Kickoff is slated for 7:00 pm, and all of the action will be broadcast live on Indiana SRN.