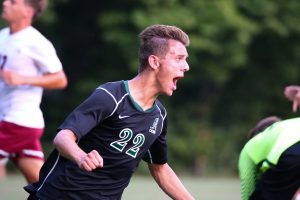 The Boys Soccer team (0-1) dropped their first game of the season, falling 3-2 to Danville CHS on Tuesday night. A Danville goal in the final ten minutes of the match broke a 2-2 tie and seal the outcome.

The Warriors, who return a solid group from last year’s Class 1A State Runner-up team, will experience some growing pains, as they seek to replace five starters from last season.  But Senior Maclain Hastings, one of the Warriors’ top scorers from 2017, picked up right where he left off, netting both of Covenant’s goals in the loss.  CCHS got assists from Seniors Gabe Byrd and Braden Havics.

Danville, returning an experience group from last year, took advantage of some defensive miscues by Covenant, leading to all three goals, on a total of eight shots on net.

CCHS is scheduled to be back at home on Thursday night, as they host Tri-West HS at 5/6:30pm.